APPLICATION FOR SAPD
This topic has been deleted. Only users with topic management privileges can see it.
S
S
Sadha_Sivam Reply Quote

You was in any faction? yes SAMD BECAUSE I GOT NO PATIENTS AT TIME AM PLAYING BUT IN PD ROBBERY WILL HAPPEN AT ANY TIME

Why would you like to join the San Andreas Police Department? (50 Word Minimum): Because some PD peoples are fail to do their jobs and miss using their
powers. So i wish to join in PD and get peace to the cities. Without any major problems. I wish to join PD and have fun in chasing robbers and making city peace

Biography (50 Word Minimum): Am a boy aged of 17. I am well known in English reading and writing. I will be playing when i get free time and am a PC gamer.
I have played lots of games. More likely shooting and simulation games I like more. But am having an low end pc .

Biography in game :At first Romeo_Raghavan is the person who said about this server we have first started in mining then i joined in SAMD and helped people a lot. I don’t have any house . An bike only am having. I have seen some other servers also but this is better than others

I have applied for weapons licence already. 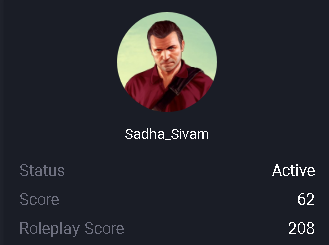