Peyton's application for President
This topic has been deleted. Only users with topic management privileges can see it. 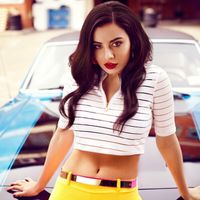 Name: Peyton
Date of Birth: 12/01/2000
Sex/Gender: Female
Age: 18
Hometown: Lucknow
Game Level: 4
Have you ever been arrested? [If so, please state why]: Never
Do you have any history in working with Law Enforcement?[if yes please state]: Nope
State your contributions towards San Andreas. [if any] (100 words minimum): Peyton lead student’s union in SF college and has raised the issues for helping students whose capabilities are suppressed because of financial breakdown. The reform in the college brought about a new scholarship scheme under which students from poor households could get education and other facilities at affordable and even free rates. This reform became a good example for union leaders in other parts of San Andreas and they took actions in their institutions which resulted in several number of admissions from poor class.
What post would you like to work in the Presidential Department: President
Why would you like to join the Presidential department at this post? (150 Word Minimum): President is the most powerful person in the city of San Andreas. As the president I will solve all the issues of everyone in the city. I will take every member’s advice and work by keeping everyone’s ideologies and views in mind. A president should think of his/her citizens and should never be biased on the basis of different grounds. I respect everyone’s beliefs, tastes and lifestyles whether they do match mine or not and as a president I will work for progress of every group in the city. Every job is equally important whether its the presidency or job of cleaner. What matters is the quality of one’s work and I will give my best as the president.
Biography (150 Word Minimum): Peyton was born in San Fierro to Mr and Mrs. Shaw two social activists. Since her childhood Peyton has been given knowledge of social, political and moral elements of the world. Peyton has maintained balance between studies, sports and working alongside her parents till the college. After getting degree of masters of arts from SF institute she aspires to become a president and has been working on it. She has been a leader of college union and lead to many big changes in her college such as introduction of distribution of free books to poor students and scholarship chances. She wants to lead the city in a good way as the president and make it a better place to live.